Walale before the hope of the Gospel...

Aaron walking to Walale with nothing but the good news of Jesus.

Revival breaks out in Walale and people begin to accept Jesus and turn from their sinful lifestyle.

After the next 10 years, over 40 house churches were planted as Aaron and Charles focused their effort on discipling the teaching the Word of God to the people of Walale.

Hundreds of people from Walale received Christ and were baptized!

Revivle prayer service lasts all weekend long after showing the Jesus Film for the first time.

Jason visits Twashuka for the first time in 2016 and commits to join Aaron and Charles with the work God has started.

Today, Twashuka Village is a wonderful and peaceful place where children run and play freely, but it wasn't always this way...  Before 2009, Twashuka was known as Walale, "the den of criminals".  Read the miraculous story of how God changed an entire village through one man's obedience.

That's what used to be said of Walale, a village in the heart of Zambia.  It was known as the den of criminals, full of drunkards, prostitution, murderers, witchcraft and anything else bad you can imagine.  Walale was the name of a senior witch who once lived in the area.  The place was spiritually dark and the atmosphere was so thick with evil, you could feel it.

But God is in the business of changing darkness into light and this story is no exception.

In 2008 God gave Aaron Mulenga a dream of people crying "Help! We need help!" in Walale.  Aaron had never heard of Walale, but he was obedient to God's voice and answered the call for help.  He started his ministry just living among the people, spending time in the community, praying and serving anyone he could.

After some time, Aaron invited his friend Charles Mwila to join him for prayer.  Aaron and Charles began holding a Bible study under an avocado tree in Walale. Many people in the village thought they were crazy. But they continued coming to the avocado tree twice a week and visited the villagers in their homes.  After Bible study they would play with the children in the village and quickly learned how much they loved soccer.

Agnes was the first person to receive Christ as savior and God radically changed her life.  Her love for God started a chain-reaction that lead to a revival in Walale!

“It was beautiful how the Lord opened doors for us to reach out to this community,” Aaron said. “We brought nothing. We just came with the Word of God, nothing else. No resources. It was just starting from scratch. We just obeyed God’s voice and God’s way to say ‘go.’ We said, “If we don’t go, then who can God send? God raised us to be the blessing to the people in this community. Not that we brought silver and gold. We brought nothing. Every long journey starts with one step.”

Agnes became like the woman at the well, sharing Jesus with everyone she knew and hosting Bible studies at her home.  Soon there were over 40 home churches planted in Walale and just about the entire village came to Christ!  Over 400 were baptized and people were experiencing peace for the first time.

This is where the work of discipleship began.  For over 15 years Aaron and Charles have been ministering and discipling this village and this really gave birth to the second chapter in our story: the school.

"At first, we shared Bible stories with the children, but then we wanted to give them Bibles, but we realized they can't read!", said Aaron.  This began the vision for a school.   God was going to take the lowest place in Zambia and turn it around to be a place where leaders are raised.   The men felt the Lord urging them to start a school for the children of Walale. They knew they didn’t have enough resources to start a school and keep it running, but they knew the Lord would provide. He did!

In 2012, some missionaries from South Africa visited and the Lord moved in one of them to build a school building. The children came flooding in to learn.  For years, the children had to do their schoolwork on the floor and many of them had no food and were malnourished.

As word spread around the community, Walale started to be called "Twashuka", which means "The Lucky Place".  In 2013,  the government of Zambia officially changed to Twashuka.

In 2016, Jason Galicinski along with Anna and Micah, visited Walale for the first time and it was during this visit that God joined Jason and Aaron's hearts together with a unified vision.  Jason, now the Executive Director of Reaching the Heart of Zambia, was praying and seeking a place to start a mission project in Africa and he was very impressed with what God was doing in Walale.  During his first three week visit, Jason committed himself to becoming "a voice for those that have none" and Reaching the Heart of Zambia was born.

"Since our first visit to Zambia, the Lord as done even more than I ever thought was possible at the time."  We've built 3 more additional buildings, dug a fresh water well, next to the school and hired teachers to teach daily at the school.", Jason said.  "We've been noticed by local government officials to the point where one of them donated over 200 acres of land for growing food for the school."

Today, because of the sponsorship program and Life Partners that have joined in the work, over 250 children come free of charge to the school to learn reading and writing, math, science, agricultural skills and most importantly, they learn it all through a Christ-Centered Biblical Worldview.

Charles Mwila became the school principal. “Discipleship has been at the center of our school. We are very much interested in having their lives transformed,” he said.

" We are impacting lives spiritually so they will become ambassadors in this community to spread the gospel of our Lord Jesus Christ."

As the village of Walale began to be transformed with the gospel, it started gaining a new reputation. It even gained a new name. People no longer called it Walale, the name of an old witch. They gave it a new name: Twashuka. This name means “We are lucky” or “The lucky place.” Charles Mwila said the people wanted the village to have a new name “because of many things that the Lord has done.” He said the village “has really seen serious transformation spiritually. People have really changed here. We have seen the faithfulness of the Lord.”

Twashuka is now a community filled with Bible study groups. Every Sunday a church meets in the school. Hundreds of villagers have decided to follow Jesus and have been baptized. Young men play soccer and study the Bible together through a community soccer ministry. Teen girls meet together to learn about living lives of purity and faith. Christians from Twashuka now travel to neighboring villages to share the gospel with others who don’t know Jesus.  It's not a perfect place, but it's a peaceful place, thanks to God's amazing work in the hearts of repentant and humble people.

If God can change the village of Walale, we now truly know that "Nothing is impossible with God."

Twashuka school receives new metal desks for class and a new fresh water well which enables us to provide food and drink during school and have water for a school garden.

A Life Partner is a person who has committed to supporting the work in Zambia on a monthly basis. Life Partners are invited to participate in a special Slack group that gives you special access to real-time updates, prayer requests, photos and videos!

Waiting to be sponsored for over 370 days... Will you?

Swilangi, a sweet little ten-year-old girl who lives with a single mother. Since her father died a few years ago, her mother has supported her family by selling vegetables in the market. But it’s a very competitive job, making it difficult to earn enough money for food and education each day. They need your help!

​Our Sponsorship Program gives children a safe learning environment, where they learn academics and more about the Gospel, as well as receiving a daily meal, and necessities, such as shoes, soap and a school uniform.

Mercy Zyambo is 5 years old and lives with both her parents who are unable to support her due to lack of work. Her dream is to be a teacher.

Blessings Banda is 7 years old and lives with her brother and single mother.  When she grows up, she wants to become a doctor.

David Chisanga is 7 years old and lives with both his parents who are refugees and unable to support him. His dream is to become a doctor.

Nancy Kunda is 12 years old lives with her mother and two siblings. She loves studying science and wants to be a nurse when she grows up.

Comfort Chikopela is 6 years old and lives with his grandmother. His dream is to become a teacher when he grows up.

Reaching the Heart of Zambia is blessed to have a great team in both Zambia and in the United States.

Want to get your hand dirty with us? You belong here!

As a gift, we wanted to send this sweet mug to anyone who donates $120 or more. This is just another way that we can say than you!
30

So why shoot so high?

In the past, we've raised thousands for mission trips to Zambia, the main house and many other projects. But nothing has been to this scale.
90 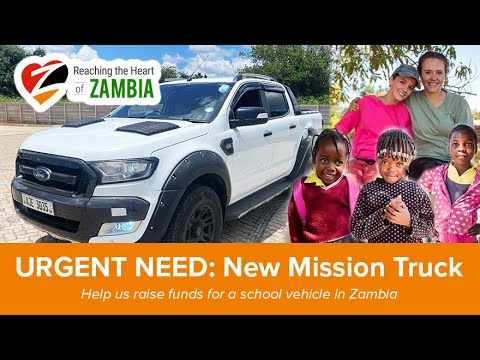 I cannot express how important this truck is to our team and to the success of the ministry in Zambia. So today I'm launching a new urgent..
20

She lost her parents when she was five...

All of a sudden, life as she knew came crashing down around her and she was forced to start living with her grandparents...
481

Soccer for Change: Rising Above Expectations

Soccer for Change began with the desire to reach young men for the kingdom in a way that engages their interests and talents, but also...
80